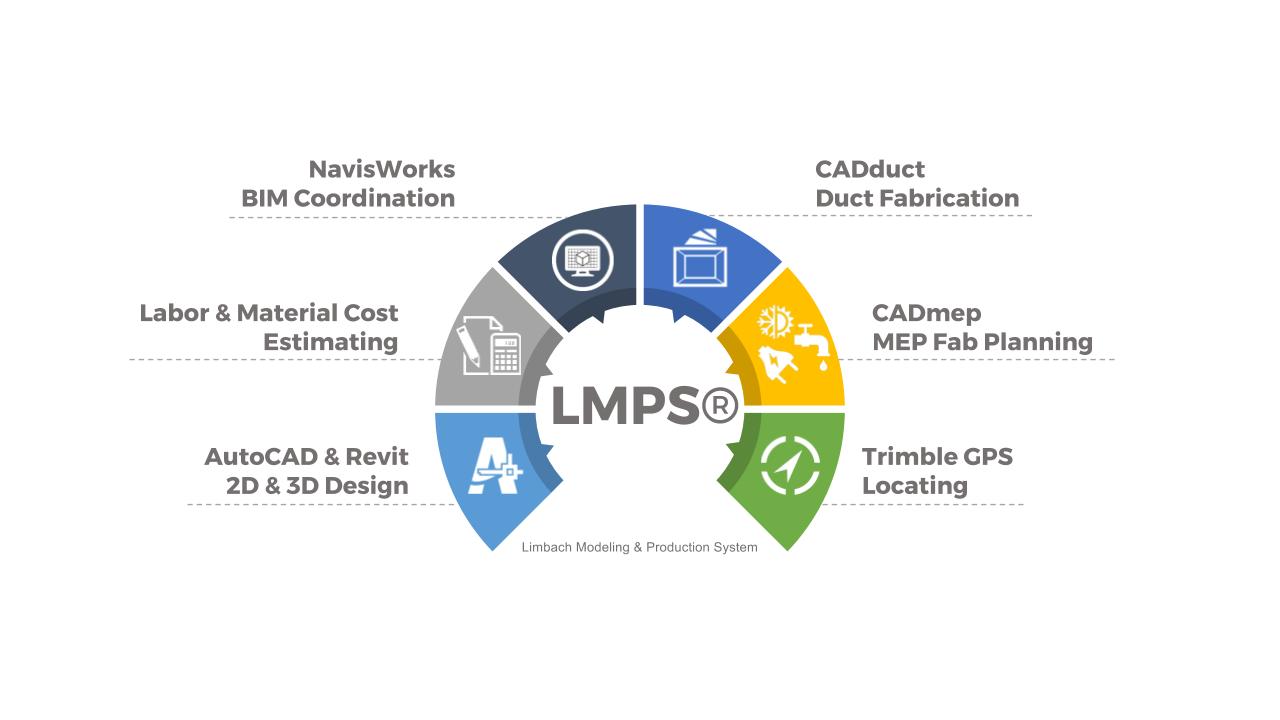 Once thought of as the pinnacle of construction innovation, Lean Construction has since become an overused industry buzzword.  In some way, shape or form, every architect, contractor and subcontractor lays claim to a lean process during the project procurement stage.  But what does lean really mean?  Like most ideals, Lean Construction is more of an aspirational goal that is nice to work toward under convenient circumstances, but an overlooked principle in true practice as routine wins out once the boots hit the pavement.


Limbach has long considered themselves a thought leader within the industry.  Since 1901, when Frank Limbach started his one-man roofing and sheet metal company, Limbach has always been looking for ways to integrate portions of the business into one, streamlined process.  In the mid-2000’s, as Lean Construction was gaining more and more traction, Limbach was quietly working on a process that would break down silo walls, integrating engineering, estimating, planning and fabrication into one truly lean system: the Limbach Modeling and Production System (LMPS).


At it’s core, LMPS is a suite of Building Information & Modeling (BIM) tools that relies on the powerful, customized data set embedded within BIM software.  The depths of detail and the broad scope of that data set, which was contributed to by a number of people in Limbach branches nationwide, is the key to making LMPS a true differentiator.  Utilizing that singular dataset, LMPS provides real time cost impact to design changes, labor management feedback through the life of the project and a truly lean process that generates design, estimation, coordination, fabrication and installation processes from a single model.


The Limbach Modeling & Production System sets Limbach apart in a field of mechanical, electrical and plumbing contractors that is often considered indistinguishable.  Competitors, even those equipped with the same BIM tools, lack both the comprehensive dataset and the integrated process that makes LMPS such a lean system.  The ability to be extremely nimble with design and estimating through Design Assist and Integrated Project Delivery (IPD) projects provides Limbach an edge in the market place.


“Design iteration supported by real time estimating affords the Owner and overall project team to truly focus on ‘Target Value Designs,’” explained Kevin Labrecque, Senior Vice President of Operational Excellence.  As a member of the team that built LMPS from the ground up, Labrecque is uniquely qualified to comment on the intricacies of the process: “The cycle between option consideration and pricing is minimized providing building owners the advantage of putting their facility to operational use, i.e. speed to market is enhanced.”


In 1990, a shift in the construction marketplace had begun.  Traditionally reliant on Plan & Spec delivery, building owners were beginning to embrace the advantages to the Design-Build method.  Charlie Boyd, the Branch Manager of Limbach in Pontiac, MI and David Brentzel, a Professional Engineer working in Limbach’s office in Pittsburgh, PA, had done a lot of work together on Design-Build projects during this time period.  Given the swelling demand for Design-Build delivery, the duo started Mechanical Professional Services (MPS), an engineering hub for Limbach offices located in Orlando, Florida.  A lead estimator, a marketing professional, and a handful of local engineers were hired to complete the initial team.


“A centralized hub simply provided us with more horsepower and more resources than most of our competitors,” reasoned Robert Morgan, Branch Manager of Limbach in Southern California.


In 2006, Tim Ward, P.E., took over as President of MPS.  One of Ward’s first acts of business was rebranding the engineering firm as Limbach Engineering & Design Services (LEDS) to better represent the vision of working as one company, nationwide.  Under Ward’s leadership, LEDS grew steadily as the branches in Ohio, California and New England embraced the value provided on Design-Build and Design-Assist projects.


“Design-Build and Design-Assist cut time off of the schedule,” explained Morgan.  “They eliminate design issues between architecture, structure and mechanical systems.  They’re just more value driven and eliminate a lot of waste.”


Ward focused on organically growing the business, adding more planners, estimators and engineers to the team.  Soon, Limbach Engineering & Design Services had become a key differentiator for Limbach.  Few companies have a setup like Limbach: a construction group and an engineering group that function in harmony.  While other MEP contractors are paying market rate for engineering on their jobs, LEDS is not a profit center for Limbach, enabling them to provide such work to their clients at cost.  The engineering and construction units holistically align their goals, utilizing two-way dialogue to truly integrate the process of engineering and construction.


“We approach the jobs differently,” Ward clarified.  “Our engineers are concerned with: will it perform, will it meet the goals of the project and the client both in terms of initial cost and life cycle costs and will it meet code?  Everything else is a joint decision with construction.”


Aligning goals and committing to teamwork is wonderful, but without a defined, functional process in place, it’s seemingly impossible to get everyone rowing in the same direction.  Ward brought a number of the components of the preconstruction process under one roof, offering those disciplines as shared services, like engineering.  But many of the branches still had their own planners and estimators in house.  The need for a process that could truly unite the company had arisen.  Additionally, the current need for new estimating software and the industry’s embrace of Lean Construction created the perfect storm of opportunity to do something bigger and better than anyone else in the industry was doing.


A cross functional team representing the different components of the business (engineering, estimating, planning and fabrication) was tasked with developing the software to support the vision of a streamlined flow of information.  The team utilized subject matter experts within the operational business units from around the country to test assumptions, iterate through system designs and ultimately prove out the desired functionality. This cohesive unit worked tirelessly, developing the back end of the software, managing item content, configuring services and creating a data extraction and manipulation interface for the purposes of estimating and reporting in a fashion that supported the overall business strategies.


Creation of the LMPS process was not a simple task.  The initial investment in terms of resources and man hours alone is enough of a hurdle to keep most competitors from attempting to duplicate Limbach’s efforts.  On top of the cost, though, the integration of LMPS into the daily routine required a complete cultural shift within the organization, spanning a number of years.


The Limbach Modeling & Production System is a living, breathing process.  Constant material cost and labor updates are necessary within any modern estimating system, but LMPS continues to evolve above and beyond routine revisions.  Over time, functionality has been incorporated to allow Limbach branches nationwide to use LMPS for labor control and tracking job site productivity.  In addition, the integration of the original software packages and Revit has streamlined interoperability between project phases.  LMPS is also being utilized to plan and execute Limbach’s offsite modular construction strategies.


Today, LMPS is utilized each step of the way, from concept through project completion.  Engineers use LMPS to design MEP systems.  The estimating department uses it to build and complete estimates in the pursuit of new work and to price current projects.  The planning department uses LMPS when coordinating and generating installation and prefabrication drawings.  The fabrication teams utilize LMPS to drive fully automated and semi-automated CNC fabrication in the shop.  Finally, 3D models, Trimble layouts, productivity tracking and installation status information, all produced by LMPS, are used by the field staff.


“Using a system like LMPS links these units under a common umbrella so throughout the entire process, information can be shared without requiring massive rework,” explained Richard Davis, National Database Administrator.  “It’s innovative because it takes a LEAN approach to how we design, estimate, plan, build and maintain the work we perform, eliminating waste every step of the way.”


The overall maintenance and support of the system, as well as development of new functionalities, currently lies in the capable hands of the LEDS team.  With Davis leading the way, the evolution of LMPS is showing no signs of slowing down.  Attaining 100% integration with Revit is a goal that the team is currently working toward, but there are far grander ideas in the pipeline.  The adoption of artificial intelligence to aid in systems routing and design optimization sequencing is an avenue currently being explored from a system utilization standpoint.  In regards to data extraction and manipulation, Davis is looking to shift more back end processing to cloud based storage while querying new technologies to enhance system performance and enable future functionalities such as AI.


“The industry is ever evolving, and the advantage LMPS has provided has been great,” Davis stated.  “But exploring, expanding and growing LMPS is how we’ll stay a few steps ahead of our competition.”


A 19th century French writer named Jean-Baptiste Alphonse Karr is credited with the saying, “The more things change, the more they stay the same.”  No industry encapsulates this saying more than the construction industry.  Despite the ideological, strategic shift toward Lean Construction, the work being performed in the field is, more often than not, being performed the same way it’s been done for the past half-century.  That is what makes Limbach different, separating them from all of the other MEP contractors available for hire.


Limbach has embraced change, such as breaking off their engineering division and creating a centralized hub for shared services that functions much like a consulting firm.  Moreso, Limbach has pushed the boundaries of innovation, investing the capital and resources while committing to this new way of doing business with the creation of the Limbach Modeling & Production System.  More and more, partners in the industry marvel at the ability to manipulate data outside of the system.  When new operational needs arise, LMPS continues to add value as the data can be used to support those needs.


At the end of the day, the Limbach Modeling & Production System is simply a tool, but it is a tool unique to Limbach that ensures Limbach can deliver a lean project workflow.  “Everywhere else in the industry, you see redrawing and rework over and over again throughout the process,” Ward emphasized.  “But LMPS is a lean process.  It provides efficiency from concept design all the way through fabrication.”